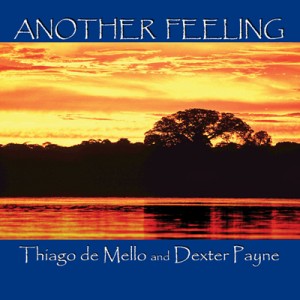 These two old friends first met working with legendary Luis Bonfa. Here they imagined a departure from Thiago de Mello & Amazon arrangements for 10 pieces or so – a more intimate sound with just piano, clarinet and percussion.Thiago and I already had a great friendship, starting with our meeting at “Encontra das Aguas” in the Amazon River, and Inspiration, which we recorded in Brazil with composer/guitarist Antonio Mello. This new idea was simply a plan for one CD…

We recorded piano, percussion and clarinet (& sax) together in his apartment in Queens over the course of 3 days with recordist, Bob Auld (a trumpeter in his previous life). Mind-blowing! What a procession of amazing artists sat at the piano that week!

First Richard Kimball, who as a young Julliard dropout had coached Thiago in arranging and theory, as he began his musical life in NY (Thiago already over 30 years old at the time!) Thiago’s story is worth reading. With Richard we recorded the lush Rede de Caboclo, gospel tinged An Evening Prayer and whimsical Kimbolian Dawn.

Then the energetic and creative Cliff Korman, who moved shortly thereafter to Rio to accompany Paulo Moura, my personal clarinet hero. Cliff, a talented New Yorker, fisrt met Brazil on a Fullbright scholarship and essentially never returned. Cliff really turns up the heat on the title track, Another Feeling, inspired musically by South African pianist, Abdullah Ibrahim, and lyrically by the early life of Dr. Che Guevarra, as well as the dancing A Hug for Gil Evans.

Haroldo Mauro Jr. is a powerful and philosophical pianist, jazz professor/mentor in Rio who was in town for some performances. Haroldo plays the most astoundingly elegant boss nova. Listen to him here, then check out his trio CD “Bossa na Pressão” with Duduka da Fonseca. Cliff and Haroldo had both played in Thiago’s band Amazon which had a weekly stand for years in NYC, first at JazzMania midtown, and later at Sweet Basil in the Village. Before my time! Haroldo is the piano architect for most of the album, including the remarkable samba-waltz What About That? and eventually the Payne/Thiago de Mello collaboration, No Wolf at the Door.

Rounding it out is the lyrical touch of Helio Alves, of YoYo Ma’s Grammy winning Obrigado Brazil. He played the poignant Exile Song. That makes four amazing pianists – not only was it inspiring and humbling to play with them, I was fascinated to hear four very different sounds come from that old Steinway! It was in that time that we began the compositional collaboration on “No Wolf”.

Ithamara Koorax shines on four vocals, capturing Thiago’s lyric saudade, and flawlessly interpreting Gershwin as well. Thiago himself played piano on Swing Low, a tribute to his parents’ conversion by Baptist missionaries in the Amazon Basin.

“Have you ever walked alone through a quiet beautiful woodland and stepped into an open space full of nothing but warm and growing brightness, and felt like nature was a cathedral and you were seated in its front row? Another Feeling sounds just like that: completely, naturally, immaculate and beautiful…” ALL ABOUT JAZZ – Chris M. Slawecki- Senior Editor  read more…