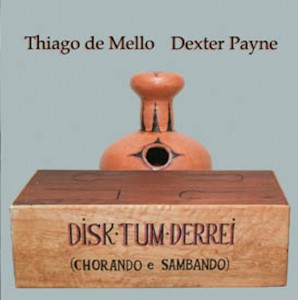 A return to NYC was planned to “finish the CD”Another Feeling – correct some “different notes” played on the original sessions, common practice these days. I did return, but instead of messing with the music already already recorded, we reconvened and played a whole different set, including No Wolf, Fireplace, Noel Rosa and more.

We also added Exile Song, one of my favorites on the first CD, and Meu Bau Velho, another beauty, both with a fourth pianist, Helio Alves (Grammy winning Obrigado Brazil). It became clear we had 2 CDs worth of nice material. It was hard to sort them out but in the end the 4 vocals and 3 sax tunes went on the first CD and the second was all clarinet instrumentals! (With a couple of surprises at the end…) The second disc was named after Thiago’s personal samba vocalese solo, (say: disk-toom-du-HEY) recorded live and interactive with the audience in a trio concert we played with Antonio Mello at the Planetarium in Rio de Janeiro, and released on his label GAU Records. Available both from both GAU and Dexofon.

During the course of these and other trips east I have played in various settings with Thiago de Mello & Amazon in several iterations – with Helio Alves, Cliff Korman, Nilson Matta, Dave Fink, Diego Urcola, Dario Ashkenazi, Hendrik Meurkens, Paul Meyer, Paulo Braga, Helio Schiave, Sergio Brandao, Café, Daniel Wolff, Sharon Isbin and recently sat in one evening with legendary pianist Dom Salvador. What an education…lifetimes of learning from each of these wonderful artists! I cannot begin to express my gratitude to my dearly departed “big brother” for introducing me to such amazing people, but even more for his friendship and the love for music he shared so freely.