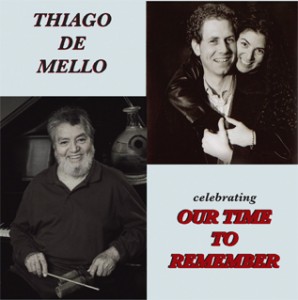 It was after Another Feeling was out, and DiskTum Derrei was totally finished, that we went to Brasil and played some gigs as a trio with Antonio, some in Rio and some in a sweet festival in Olinda, Pernambuco, “MIMO”. Also in Olinda, I played one night with Thiago and Sharon Isbin. We joked that I should powder my hair and paint my clarinet gold!

The video of Radames e Pele is from that trip, from a concert at the planetarium in Rio. It was so cold – the AC was killing in there, almost too cold to play clarinet!

Our Time To Remember

The next album we decided to try a more traditional format – with bass and drums! To Cliff and Haroldo we added Leonardo Cioglio, bass and two veteran drummers, Ceslso Machado and Helio Schiavo, drummer for Baden Powell for 18 years. guitars were added, Lulu Galvao and Romero Lubambo, plus Gabriel Grossi on chromatic harmonica. The project went slowly – the expense was greater – more musicians – and logistics were more difficult, plus Thiago was working less, almost not, with the exception of occasional concerts with Sharon, a real lifesaver. At the last minute, he decided to add two earlier recordings to the disk, great tunes recorded before my time with him.

In the midst of it all, Thiago’s youngest, Janine, announced her engagement to a wonderful man, Eckart Buettenmuelher. Thiago had good reason to celebrate his daughter’s new husband, and he did so with great joy. This album is dedicated to their marriage.